Thanksgiving Wishes For you 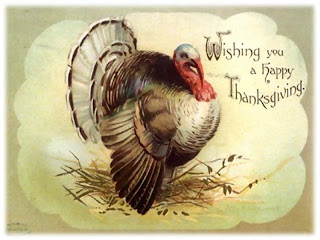 Just want to send you best wishes for a wonderful, warm and thankful Thanksgiving day. Filled with blessings or the table, the heart and hope.
Ruth
Time Was Antiques
http://www.timewasantiques.net
Posted by Ruth...Time Was Antiques at 12:39 PM No comments: 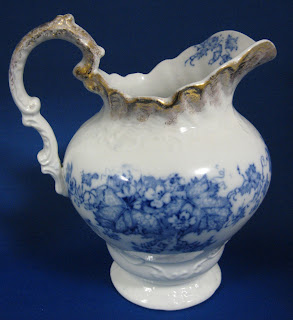 I love any color...as long as it's blue! Well, not quite, but it is my favorite. I also love trasferware and this pitcher or jug I recently acquired and listed on Time Was Antiques just made me smile!!!!

I can just picture the jug on the table full of bronze chrysanthemums or on a mantle in a place of honor. The pitcher is in excellent condition, was made by E. Wedgwood, England from 1908-1925.

For historic transferware, I can recommend the Transferware Collectors Society
for it's extensive records of historic patterns and ongoing research. Check it out! We are members and it is a great organization.

To see more of the above transferware jug or pitcher just click the photo.

We want to post Abraham Lincoln's Thanksgiving Proclamation 1863 which you may like to read...it's brilliant.
ABRAHAM LINCOLN'S THANKSGIVING PROCLAMATION 1863

In honor of the season, I want to share with you the text of Abraham Lincoln's Thanksgiving Proclamation from 1863:

Lincoln's Thanksgiving Proclamation of 1863
By the President of the United States of America.
A Proclamation.
The year that is drawing towards its close, has been filled with the blessings of fruitful fields and healthful skies. To these bounties, which are so constantly enjoyed that we are prone to forget the source from which they come, others have been added, which are of so extraordinary a nature, that they cannot fail to penetrate and soften even the heart which is habitually insensible to the ever watchful providence of Almighty God. In the midst of a civil war of unequalled magnitude and severity, which has sometimes seemed to foreign States to invite and to provoke their aggression, peace has been preserved with all nations, order has been maintained, the laws have been respected and obeyed, and harmony has prevailed everywhere in the theatre of the military conflict; while that theatre has been greatly contracted by the advancing armies and navies of the Union. Needful diversions of wealth and of strength from the fields of peaceful industry to the national defence, have not
arrested the plough, the shuttle, or the ship; the axe had enlarged the borders of our settlements, and the mines, as well of iron and coal as of the precious metals, have yielded even more abundantly than heretofore. Population has steadily increased, notwithstanding the waste that has been made in the camp, the siege and the battle-field; and the country, rejoicing in the consciousness of augmented strength and vigor, is permitted to expect continuance of years with large increase of freedom.
No human counsel hath devised nor hath any mortal hand worked out these great things. They are the gracious gifts of the Most High God, who, while dealing with us in anger for our sins, hath nevertheless remembered mercy. It has seemed to me fit and proper that they should be solemnly, reverently and gratefully acknowledged as with one heart and voice by the whole American People. I do therefore invite my fellow citizens in every part of the United States, and also those who are at seas and those who are sojourning in foreign lands, to set apart and observe the last Thursday of November next, as a day of Thanksgiving and Praise to our beneficent Father who dwelleth in the Heavens. And I recommend to them that while offering up the ascriptions justly due to Him for such singular deliverances and blessings, they do also , with humble penitence for our national perverseness and disobedience, comment to his tender care all those who have become widows, orphans, mourners or sufferers in the lamentable civil strife in which we are unavoidably engaged, and fervently implore the interposition of the Almighty Hand to heal the wounds of the nation and to restore it as soon as may be consistent with the Divine purposes to the full enjoyment of peace, harmony, tranquility and Union.
In testimony whereof, I have hereunto set my hand and caused the Seal of the United States to be affixed.
Done at the City of Washington, this Third day of October, in the year of our Lord one thousand eight hundred and sixty-three, and of the Independence of the United States of the Eighty-eighth.
By the President: Abraham Lincoln
William H. Seward,
Secretary of State

To all of you from us....have a wonderful day of Thanks giving tomorrow with friends and family. We have so much to be thankful for, even if things are a bit tough.

We are dealing with parkinson's disease but are incredibly thankful for all of the blessings we have.

Give thanks in all circumstances; for this is God’s will for you in Christ Jesus.
Posted by Ruth...Time Was Antiques at 4:55 PM No comments: 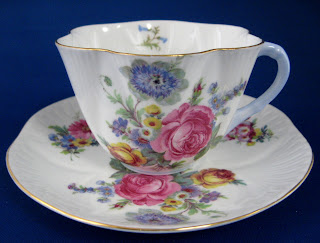 I do...I love teacups! I have a collection and specialize in finding gorgeous teacups for your tea table. And Shelley China, England is one of the best manufacturers. It is so sad they closed in 1966, but at least they produced lots of china while they were open.

This is a cup and saucer in the rarely seen German Rose Sprays in the Dainty shape, a shape which is probably the most famous of Shelley's numerous shapes.
Your Earl Grey would just taste better in this teacup...don't you think???? This particular design and shape was only made from 1958-1966. Lovely.
You can read more about the teacups at Time Was Antiques by clicking on the photo.

On a personal note it's snowing in Sequim...and all the Olympic Peninsula. Not really sticking here and not expected to continue, but fun.  The biggest news is the cold snap. It's 28 degrees at 8PM & expected to drop into the low 20s. Tomorrow night we are forecast to be about 18. Brrr...let's hear it for fleece sheets!!! Hope you are warm...seems to me it's time for a cup of tea!
Posted by Ruth...Time Was Antiques at 8:21 PM No comments:

Ground zero this weekend in Seattle for Steamcon II the second annual convention of the Steampunkies...a group that mixes Victorian ethos with fantasy heavy on the techno stuff.   I found out about it through both Victoriana and watches...strange combo, but it's quite fun.

Here is an article from the Seattle paper about it. Watch for corsets & flying machines which will give you the idea. Apparently going mainstream. Who knew?

But we have been selling out of our steampunk jewelry line, so...Here is an example: 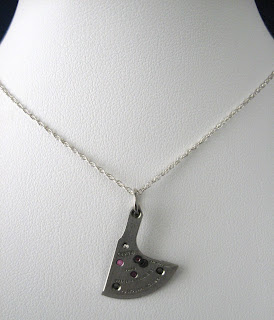 So...if you are in the Seattle area today look out for lots of fun steampunk!

Posted by Ruth...Time Was Antiques at 8:29 AM No comments: 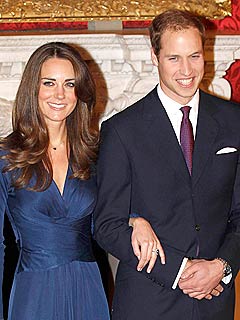 Prince William and Kate Middleton have officially announced their engagement today, Nov. 16, 2010. Will gave his long time girlfriend the sapphire and diamond engagement that his father Prince Charles gave his mother Princess Diana. You can see the announcement at The Royal Channel at YouTube at this link: Will & Kate

The engagement has been long expected. The wedding is planned for spring or summer of 2011 and the couple will live in Northern Wales where the Prince is serving with the Royal Air Force.  Congratulations!!!
Posted by Ruth...Time Was Antiques at 11:37 AM No comments: 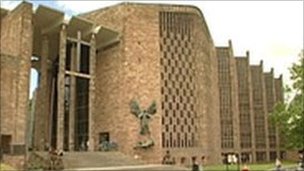 The 70th anniversary of the Nazi blitz on the town of Coventry, England was marked today. A horrible day during World War II for the family of my husband, living in Birmingham, England 20 miles away. Along with his younger sister, he was not evacuated to Wales for safety with his 2 older sisters. His oldest brother was serving in the Coldstream Guards.

The bombing was remembered as horrific and John often wonders how his parents coped with the terrors of war  and just trying to feed the family between times spent in the bomb shelter at the end of the garden.  Coventry was a strategic site for the bombers because of it's heavy industrial plants and rail interchanges. Over 1200 people were killed and most of the city was destroyed. John's father and brother who was on a short leave had walked to the bridge over the railroad bridge close to their home and watched the planes dropping their payloads and the subsequent explosions and fireballs.

As they stood there watching, John's father Sam thought he hear Annie his wife calling him so they left the railroad bridge and started quickly home. A few minutes later the railroad bridge went up in an explosion as it, too was bombed. Annie hadn't called, but if they had stayed they would have gone up in the explosion.

story at the BBC of the anniversary of the Coventry bombing Nov. 14, 1940

In other news at Time Was Antiques, we are running a non US buyer special. Pay for Priority shipping on your order and receive a free upgrade to Express Mail!

It's so fun to me that so many of our items are so well traveled. We travel to England to buy, send them home to the US and then ship them all over the world...including back to the UK! How fun is that!
Posted by Ruth...Time Was Antiques at 6:08 PM No comments: 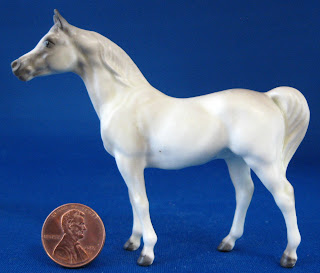 I was HORSE mad when I was young! I loved the Black Stallion books and asked for them for birthdays & Christmas until I had the whole set, then reread them until they fell apart. I had large plastic Breyer Arabians & made horse blanket, saddles & reins for them...not to mention stables and paddocks. I loved them!
I also collected ceramic horses which were lovingly stored in a china cabinet in my bedroom that nobody wanted. I especially liked the Hagen Renaker...although I couldn't have told you that that was the name of the maker because I bought by what I liked and promptly took off any labels. After all, they were real to me!
This is one of the last of my horse collection from the 1950s, and was one of my favorites. I gave half the collection about 15 years ago to 2 preteen sisters. Who knows where they are now. But....This is the miniature Arabian stallion and it is mint and beautiful. I just added it to Time Was Antiques and here is a link for more photos & descriptions: Hagen Renaker Arabian Stallion
I ended up with a quarter horse later when I worked summers wrangling at a mountain lake in California, sometimes getting to ride with the family & 25 horses 2 days up Deer Creek form Chico, California to Lake Almonor. One year my husband & I had to move 18 of them from a threatening forest fire on foot...but that's another story!  Later, we had the filly of the palomino I had for our daughter who was horse mad. Ah memories!
Posted by Ruth...Time Was Antiques at 6:03 PM No comments: