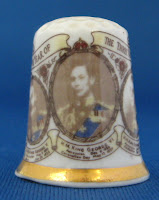 This is the coolest British Royal memorabilia thimble that I just acquired with a collection of royalty thimbles on our last English buying trip.
Made in 1986-1987, the bone china thimble by Fisbury commemorates a special year in English royal history. Between June of 1036 and June of 1937, there were 3 men annointed king.
King George V was on the throne at the start of 1936 but died in June. On his death, his oldest son was declared Edward VIII and everyone that all was well. However, before the coronation could take place, Edward VIII abdicated the throne so that he could marry American divorcee Wallis Simpson. Hence the 3rd king, George VI, Edward's younger brother inherited the throne and was crownded in June 1937. Actually, I think he was a MUCH better king than his playboy, Nazi sympathizing brother would ever had been.
So...there's a history lesson for the day. Cool, huh!
For more innformation click this link to the item:
3 English Kings Thimble
For other great British Royal Commemorative items, visit our home page and look for the English Royal Commemoratives category with sub categories for each of the royal family starting with Queen Victoria.
Today is the 1st real spring day for a bit. It was beautiful! My DH was out trimming bushes and I took a walk to look at the budding trees and spring bulbs. On the end of our street I could see all the way across the Strait Of San Juan De Fuca to Victoris, British Columbia Canada. A great view for a lovely day. Hope yours was a nice!
Posted by Ruth...Time Was Antiques at 8:04 PM No comments:

I wanted to share this little hand painted porcelain dish. This is a butter pat and can be used as a teabag holder (because I have a lot of items for tea drinkers) and I think it's so cute. The butter pat was made by Wiesley China which was a part of Weissman Brothers, a US china firm that closed in 1957. They employed artists to hand paint their items, and this Pine Cones design was painted and signed by Barry. Don't know his last name, but they are cute! I also have 2 with a Dogwood Berries design that Barry did as well.
Ya gotta have a place for a tea infuser or teabag....no go for dumping it on the table. Besides, in a dish you may want to use it again for a second cup!
You can see this and others at Time Was Antiques. I have lots of teabag holders or caddies and quite a few butter pats which I tend to multi purpose around the house.
Hope all your gardens are springing with flowers and you didn't have too much rain on your Easter egg hunts. We were wet and windy. All our tulip leaves were flattened. But they have perked up today...just in time for another round of wind and rain tomorrow. As the weatherman said before our last storm came in last Fri. "You'll wake up tomorrow and think it's November again!". Hope it's nice in your area.
We went to the nursery today and picked up heather and ajuga to plant in a bare patch in the front garden, but as it's raining, we'll postpone until tomorrow. The arborist was across the street cleaning up the downed pine branches from the last storm. Hope it passes us by this time.
Posted by Ruth...Time Was Antiques at 5:03 PM No comments: