Hello and welcome to my contribution to Tuesday Cuppa Tea with Antiques And Teacups, and the other blogs listed below. 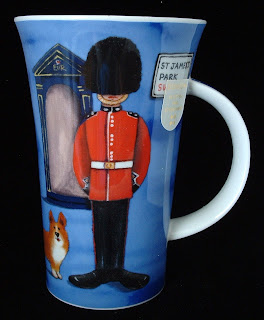 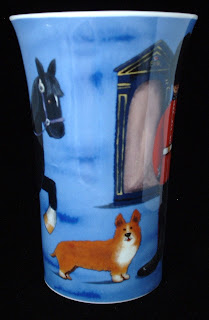 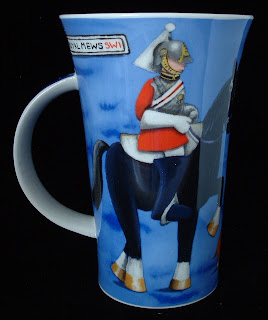 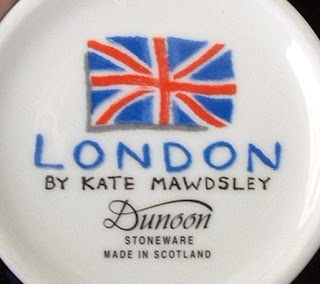 This is a really cute large bone china London mug by Kate Mawdsley for Dunoon China, England. I love her designs! This has a Q!ueen's Guard soldier, a Royal Horse Guard and even a Corgi, Queen Elizabeth's favorite dog.

About 2 weeks ago, I mentioned that my husband had been in the Coldstream Guards, one of the 5 regiments that make up the Queen's Brigade of Guards, and mentioned that you can learn to tell them apart by the differences in their uniforms. I had several emails asking me to explain, so...here goes.

The Queen's Own Brigade of Guards are actually crack troops drawn from 5 different regiments. They can be guarding the Palaces and the Queen for several months and then be off anywhere in the world in the next moment. My husband "found the guard" as it is called in a red tunic and bearskin hat for several months then his regiment was sent to various places for tours of duty then back again to London and the Palaces. He was in Germany and the Suez area.

Check out the buttons, because that is the best way to tell the soldiers apart.  They all alternate at the Palaces, and all wear red tunics. The only way you can telol them apart easily is by the order or configuration of the buttons. Their collar, cal and shoulder insignias are different as well, but the buttons is the easiest to spot.  By the way, all Guardsmen must meet a height minimum of 6 feet tall...more intimidating.

I am starting with the Coldstream Guards, because it is my husbands old unit.

This is a Coldstream Guard tunic photo I took at the Guards Museum in London....well worth a visit by the way.  Notice the configuration of the buttons being in sets of 2. The Coldstream Guards are affectionately known as the "Chilly Rivers". 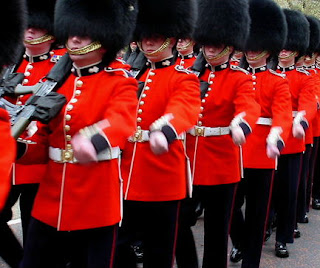 This is the Grenadier Guard unit that was heading from St. James Palace to Buckingham Palace. Note that there are no gaps in the buttons. 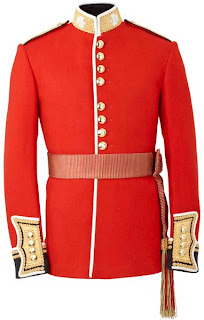 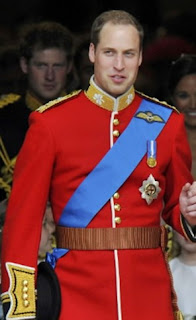 The Irish Guards are next with their buttons in sets of four. Prince William was married to Catherine Middleton in the uniform of the Irish Guards. 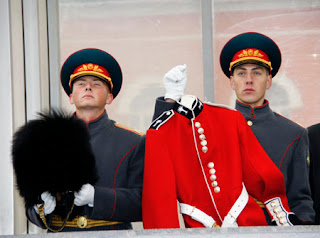 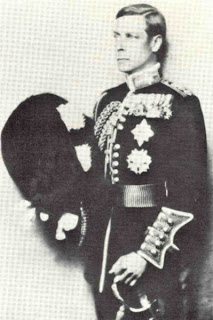 The Welsh Guards have thri buttons in sets of 5. The above photo from the BBC archives is 2 Welsh Guardsmen who have just graduated from training with their first uniforms. Below thm is a photograph of King Edward VIII in the uniform of a Welsh Guard. Edward abdicated the throne in favor of George VI so he could marry American divorcee Wallis Simpson in 1937. 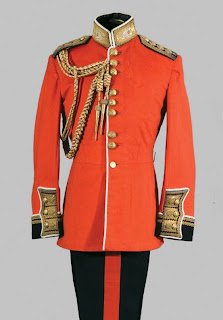 Lastly are the Scots Guards with their buttons in sets of 3.

So I hope when you see the festivities for Queen Elizabeth's Diamond Jubilee in June you will be able to tell which unit is which!

For more info on the Dunoon London mug at Time Was Antiques, click on the photos.  I am joining the following blogs. Have a wonderful day and have a cup of tea with and enjoy your day!

What a great and informative post! Love the mug!
Ruth

Love to come to your awesome blog and "get smart!"

Once again, we learn something new and interesting from your writing. Thank you!
Come visit us at http://www.ladybstimefortea.blogspot.com/
Cheers! Ruthie

Wow. That's amazing. I thought they were all the same outfit. I find myself paying more and more attention to soldiers these days because I have a baby who plans to be one in a year or so. Love the red coats... I've heard that expression somewhere....

Fascinating about the Guards! What a interesting post you have here! I love it!
Hugs,
Terri

This was a fascinating post! Loved the info about the buttons/guards. The mug/beaker is so cute...I have several from that company/artist. Have a great weekend~
shawn